In the mushroom corner of your produce department, they probably already have stuffed mushrooms, with pizza toppings or something fancy. But you can make your own! And, particularly, you can make your own when your roommate prefers her portabellas plain with A1 on top.

These particular ones were made with leftover lemon pepper chicken and some shredded cheese. Clean your mushrooms and set them up on a non-stick baking tray with the stems upwards. If you want them plain, preheat your oven to 350°F and then just stick them in.

But if you want stuff on/in them – and they’re way more filling that way – go ahead with that. For the lemon pepper chicken, I just used my fingers to put little mounds of it on that wouldn’t spill off, and then I topped that with cheese.

I’ve made them before, though, with chevre and pepper and sundried tomatoes. For that, you want to mix the melty delicious filling in a bowl with an egg so that it’ll hold together in the oven – it also makes it easier to actually put on the mushrooms without going all over. 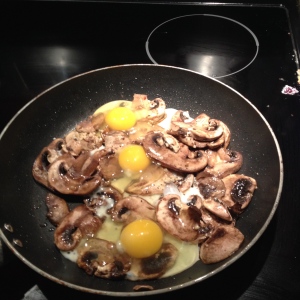 We had some mushrooms that needed using up and we’ve been keeping eggs in-house more often, so breakfast seemed like a great way to take care of them.

We buy the little things of pre-sliced mushrooms. They’re like ten cents more than the not-sliced ones, and I’d really rather not fiddle with having to do all that chopping. So I just needed to slap a little bit of butter in the pan, turn it to medium-low, and rinse the mushrooms.

Drop the mushrooms in the pan, toss in some diced garlic, and ignore it for a while: they need to sautée down.

When they’re mostly done, crack a couple eggs on top, add a little pepper and seasoning salt. Cook the eggs until they’re the way you like them, and serve.