I fairly badly needed to clean the kitchen: dirty dishes on the counters and island, stove greasy, dirty dishes in the sink, clean dishes in the dishwasher – anyway, you get the point, which is that I am a human disaster. We also are once again out of bagels. So I needed both food and motivation to not live in filth. 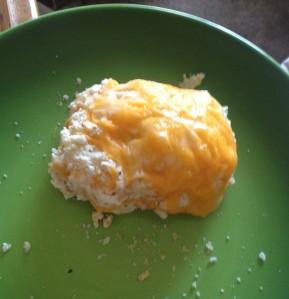 Start your oven preheating to 350°F and get out your ingredients, a large spoon, a bowl, and a baking tray.

Throw a bunch of Bisquick in the bowl, then add a fair sprinkling of pepper and seasoning salt: you don’t want tons, probably, but the bit of extra flavor makes them taste amazing and also like they took more than a half second to plan out.

Add a dollop of milk! Then start mixing stuff up. It should end up just moist enough to hold together. When you’re close to that texture, toss in a bunch of shredded cheese and some more milk and mix that in, a bit more gently. Does it more or less hold together? Good.

Now use the spoon to transfer big lumps of it to your non-stick baking tray. I got six biscuits about the size of my palm, but results will vary depending how big you like them and how much Bisquick you started with. Then add more shredded cheese on top, as much as will stay more or less in place. At some point when you’re finishing up, the oven should be finished pre-heating, so just pop those in. I cooked mine for 13 minutes, and they’re still kind of soft and the cheese on top is gloriously melted but not really bubbly. Mix up your baking time as needed! You probably don’t want anything shorter than 8 minutes or longer than 20, though, no matter your biscuit size.

While those are cooking, you can probably clean most of a kitchen, putting away dishes and loading the dishwasher and wiping down counters. I found it very motivating, because you can get a lot done in a short time and then afterwards sit down with a piping hot, cheesy biscuit as a reward for being an actual adult who does cleaning and stuff. 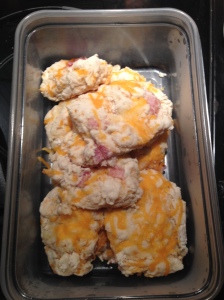 I’ve mentioned how much I love Bisquick, right? If not: I really love Bisquick. You can combine it with milk and use just that to produce biscuits. Or you can add more stuff, and have incredible biscuits.

Start your oven preheating to 350°F and cut up the bacon with kitchen shears. Add a couple cups of Bisquick and a couple handfuls of shredded cheese, then mix it all up so it’s sort of evenly distributed. Splash in some milk – you don’t need much – and either use a spoon or your hands to combine it so that it’s still quite dry but pretty much sticks together. Then you can either make it ball-type things and stick them on an ungreased nonstick baking tray or do what I did and roll it out and then cut it into fairly large vaguely squarish things and bake them for 12 minutes that way.

They taste like breakfast! All in one portable food.